The International Cultural Centre, a space destined to thrive in facilitates communication and coexistence between different cultures, takes its name and creative impetus from the Egyptian-Greek Mythological figure Hermes. Often identified with the Roman God Mercury and the Egyptian God Thoth , Hermes as a winged deity is the messenger and interpreter to the gods. Syncretized within the persona Hermes Trismegistus, the intervention of Hermes within human affairs often signals the states of existence that are transcendent of dialectics. In the words of Antoine Faivre:

“Hermes shows the path of otherness, of living diversity, of communication of souls…Hermes favors and stimulates living relationships within art and literature.”

He is the god of boundaries while at the same time the god of communication; the universal translator. In Mozart’s’ famous opera The Magic Flute, Hermes (Mercurius) is disguised as the character Papageno. In the role of a bird catcher Papageno embodies another of Hermes attributes, the ability to exemplify one of the major maxims of alchemy: fac fixum volatile

(in other words) make fixed the volatile, and make volatile, what is fixated.  These characteristics of Hermes’ nature resonate with the Cultural Center’s mandate: the promotion of the spirit of interchange.

So, when designing a building for this grand purpose the question becomes, what is the spirit of interchange? In my role as an architect I perceive interchange on many levels: the kinetics of land and natural foliage on the site, the impulses and intentions of bodies as they occupy space, the manifestations of the outside world converging upon and communicating with built form, etc. As I began my design for the cultural center, I looked for an architecture able to coexist with the calm nature of the Tuscan countryside while still emphasizing the flash of the modern intellect behind of the building’s aspirations.

On hilly terrain used for centuries as farmland, the site’s rocky fabric is striped with ribbons of handmade stone walls loping endlessly towards the horizon. Avoiding vertical massing and rigid angular lines as too blatant a realization of man’s presence and a smothering of the natural beauty of the land I worked to instead to extenuate the flow of the earth to continue along its natural progressions. Designing a building that drapes into the land’s sloping contours a person strolling through the countryside could easily walk on to the roof of one of the building’s outstretched arms, before even realizing they had approached the structure. Accentuating the horizontal design that bows and bends towards the earth we selected a material and a color scheme that blends with the surroundings while adhering to the municipality’s strict rules of contextualization. To meet these regulations Tuscan stone, a steel and wood frame, glass terra cotta roofs etc. are utilized with the terrace and roof top planters furthering the building’s camouflage.

Although peacefully interacting with the Tuscan countryside was an important subtext to the design the Cultural Center more fundamental was a belief that buildings are about function as much if not more so than form,. In this project I wanted to culturally transcending the project’s fixed location within in the Tuscan countryside creating an ambiance where anyone could feel that they belonged. In its final form the building is unpretentious and simple while at the same time possessing strong instincts towards architecture. The character of the building’s symbiosis with the landscape is not passive. Instead, like a living creature whose camouflage is a dynamic part of its existence, the building engages in a peaceful but earnest conversation with the landscape.

Anticipating the corporeal patternings of the persons who will pass through the space a program was developed to fulfilling the multifarious intellectual needs of the center’s participants. Echoing the array of cultural, economic and industrial backgrounds they will bring there the flexibility of the space was maximized through the incorporation varied spatial systems. Defining a study and research library, an exhibition area, a multimedia room, an auditorium for conferences and seminars, a dormitory for residents and a meditation area the design encourages flexible uses of the center’s different parts. As a space of interchange the gregarious multi-cultural environment of the Hermes Centre will be a space exemplifying both its founder’s intentions and the spirit of its context. 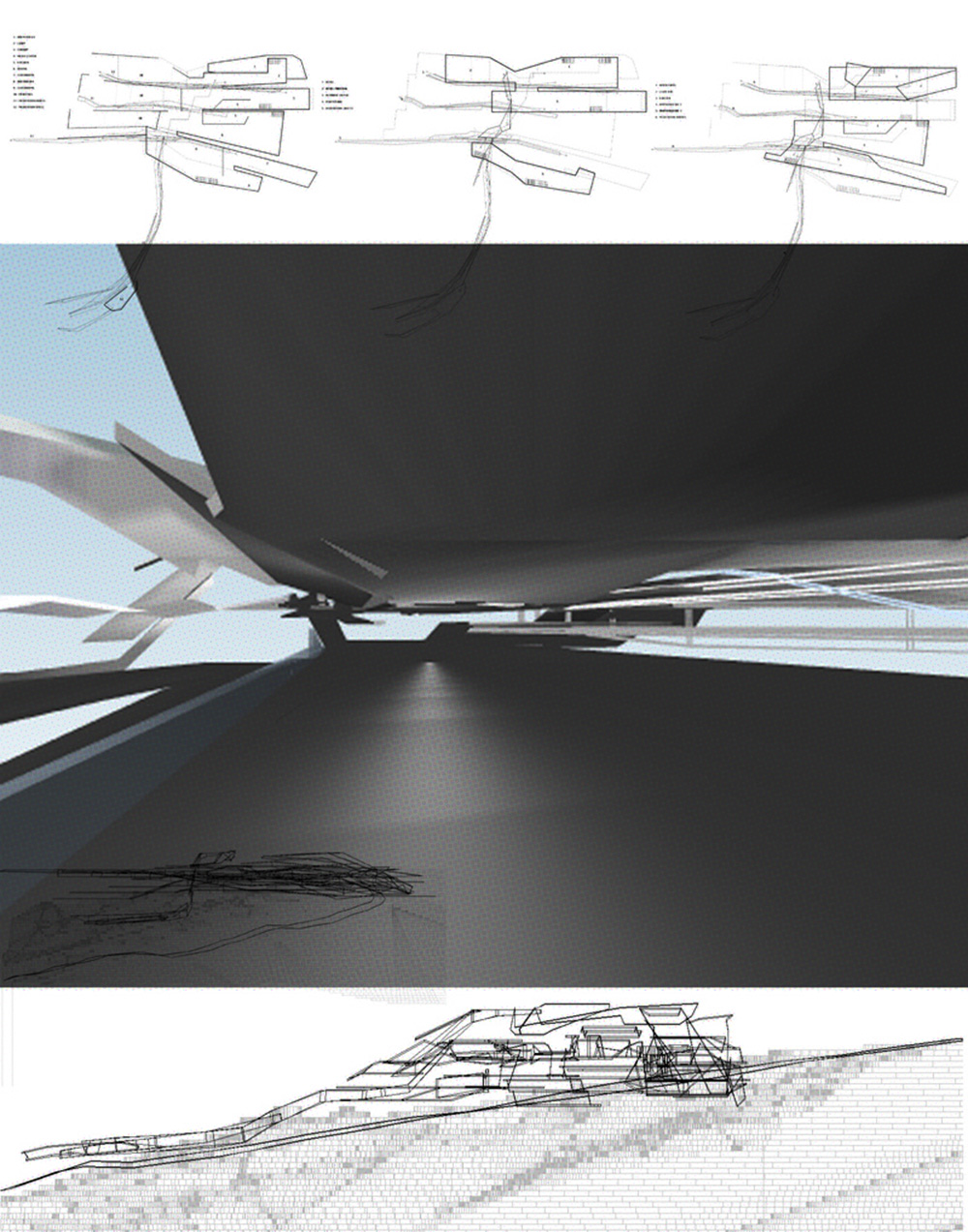 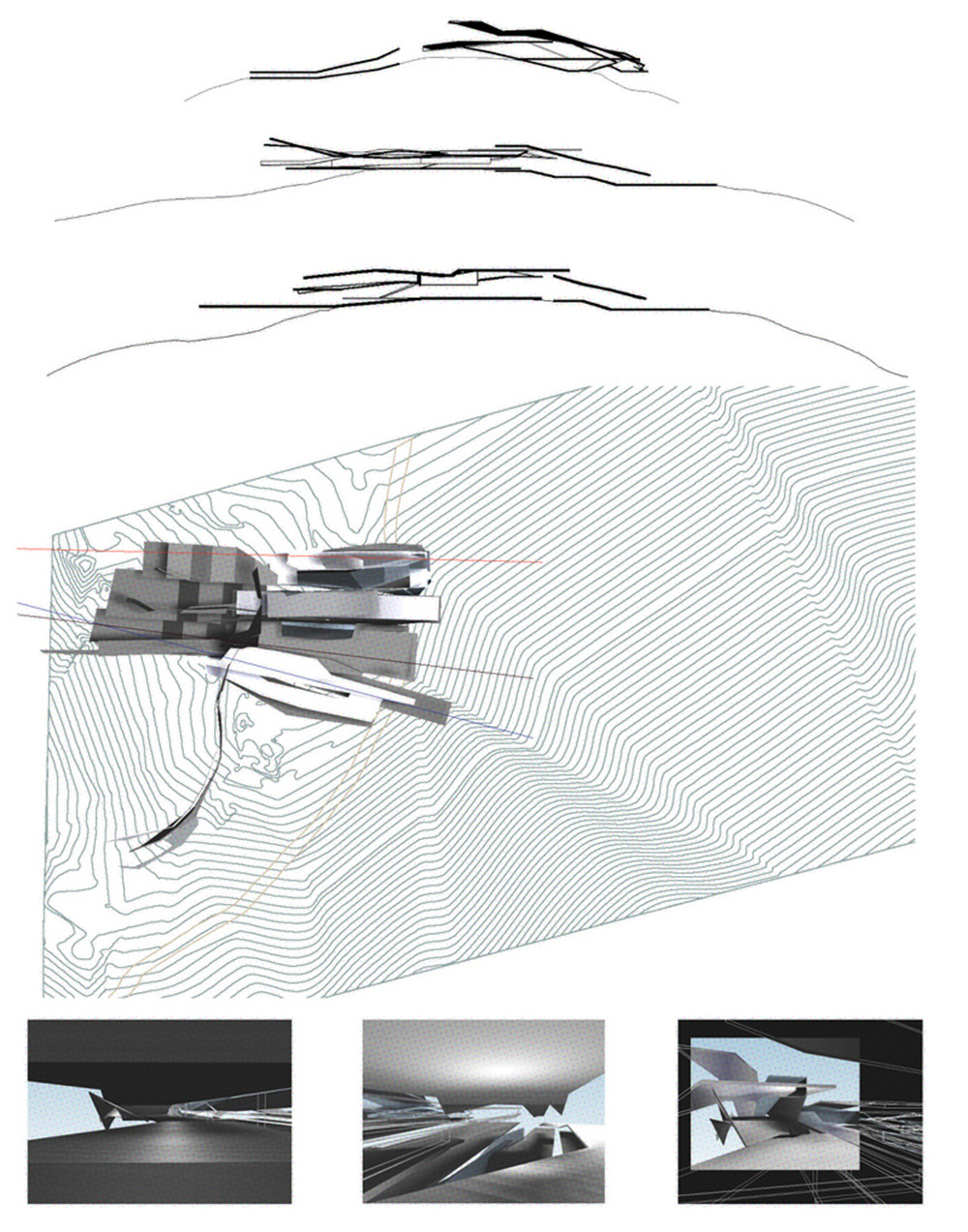 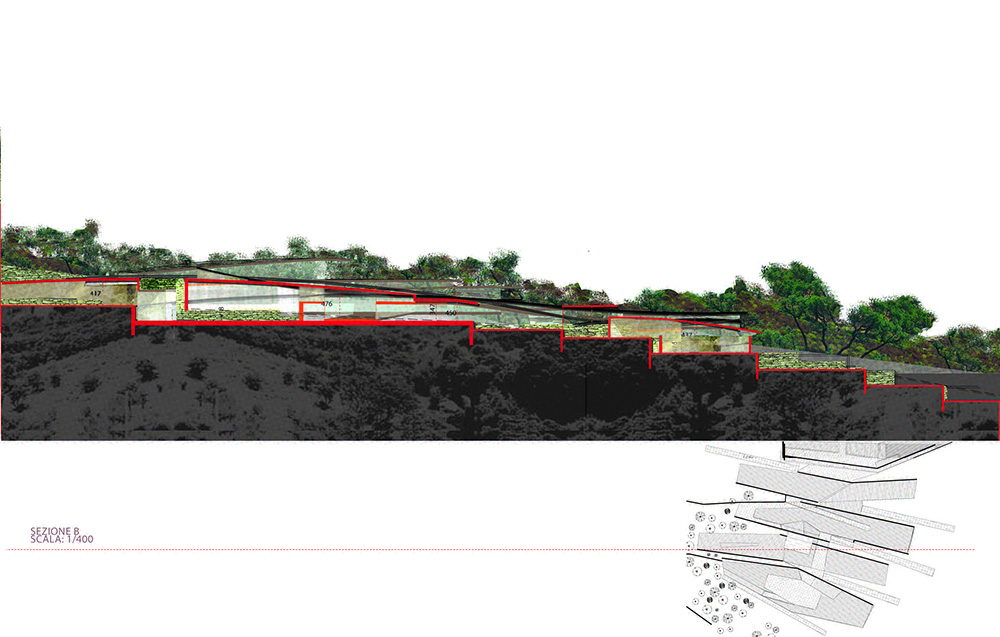 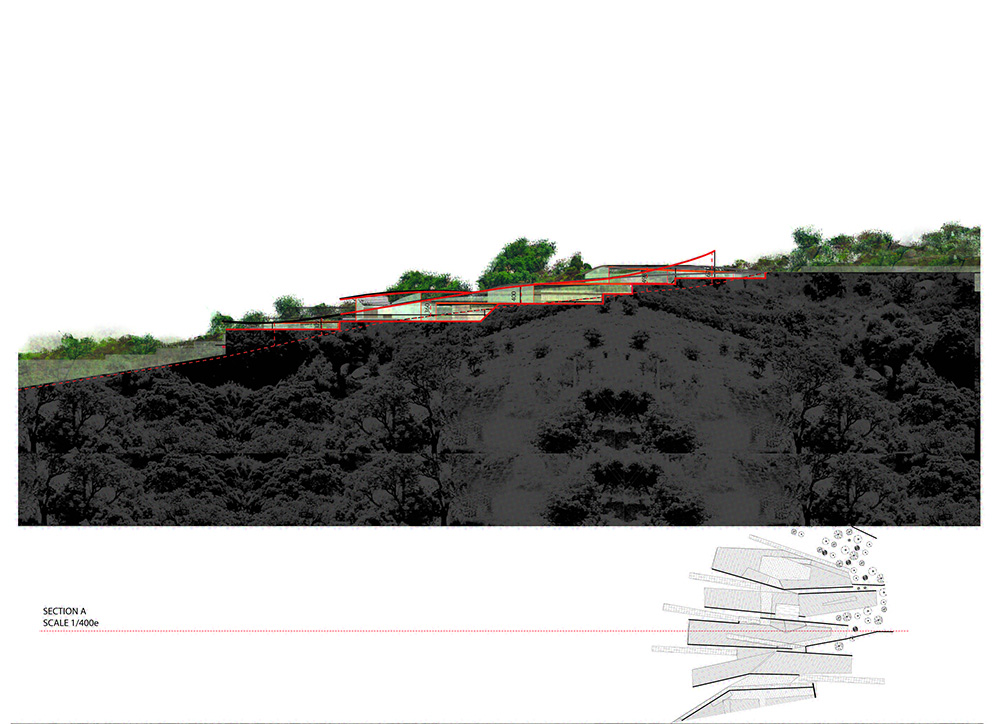