This house located on the Linnie Canal in Venice California is situated at a convergent space of urban contradictions, architectural experimentation, historical resonances and social and programmatic ideologies.

In 1905 a worldly tobacco mogul by the name of Abbot Kinney began the development which transformed the land south of Ocean Park Boulevard through the Del Rey peninsula into the “Venice of America.” Visitors enjoyed his canal network, ornate Venetian style shopping arcades and a festive entertainment pier with dance halls, bath houses, and entertainment. Despite the continuing success of Venice, the popularity of the canals waned and in 1929 much of the canal network was filled-in and converted to public streets. In the sixties the remaining canals again became popular hosting beatniks, artists, hippies and the likes of the Doors’ Jim Morrison. Today, the canals and Abbott Kinney’s other Venice creations continue to attract visitors and residents from all over the world.

In 1999 the clients Shelly and Lothar purchased the land from its original owner, an Italian immigrant’s son who had bought it directly from Abbot Kinney. They envisioned a house that would feel like an artist’s loft but functioned like a traditional home: a place where they could work, play, entertain friends and family, dream and create.

The design for this home needed to balance the historically significant surroundings, but more importantly it needed to satisfy the desires of two strong minded intellectual and artistic clients who had both since childhood had dreamed of a living in a futuristic contemporary space.

Taking advantage of the clients’ artistic abilities, rather than drawing Saee began with a collaborative exchange of ideas. He encouraged each of the clients to write as story or essay expressing their concepts for the house and inspired by these Saee produced a first series of sketches responding to their writing, interrogating the site on the canal and evoking the history of the place.

Aspiring to transcend the physical limitations of its small 30 ft X 90 ft lot, as well as the normative space defining elements such as walls, floors and roof planes, the building gestures towards the canal transforming as it moves through harnessing uncertainty as a generator of form. The habitable spaces of the house formed with the inertia of un-programmed surface elements and areas converging, diverging, and layering. Once defined, those areas were programmed to meet the needs of the house’s occupants. Further development refined the collection of spaces with the immergence of a unique spatial order and tectonic sensibility.

The exterior walls slide and shear responding to the features of the site while accommodating the functional needs of the program. Within these physical constraints the clients imagined that a lot of living would happen. Supplementing the basic domestic spaces (bedrooms, bathrooms, kitchen etc) are two artistic spaces (a writing study and an artist’s studio), a small autonomous apartment and a 2-car garage.

Within the resulting three-story structure functional spaces are arranged to create a psychology of continuity between the interior spaces and the canal. Opening to the front yard and towards the canal the boundaries of the living area are dissolved in a transparent wall of sliding doors and fixed glass. This wall of glass spans the building’s North and Southwest sides of the building dissolving the corner and enhancing the perceptual extension of the interior all the way to the canal.

Climbing the stairs brings you to the bedroom, bathroom and a small studio apartment that comprise the second floor. The studio apartment is located to one side and has a private entrance on the bottom floor. With a few steps in the opposite direction takes you arrive at the master bedroom which echoing the living room dynamically joins the interior and exterior with a slanted glass wall the draws attention to the canal and the palm trees beyond. On the North side of the bedroom a small space opens towards the property line. Tailored for Shelly to escape, think and write poems this compact space expands to the space of the canal with an entire wall of glass.

The stairs continue up to a 3rd-story studio loft space, where Lothar creates and plans his installation art, and then onto to the roof level. Affording an awe-inspiring view of the Linnie Canal and the beautiful Venetian landscape one realizes that they have been transported from the heart of one of the world’s busiest metropolises to the tranquil view of this peaceful neighborhood.

In this way the Linnie House transforms reality, propelling its occupants from the hustle and bustle of urban Los Angeles with the peacefulness of a vaportto travelling through Italian canals. Gliding through smooth waters this home’s creative inhabitants arrive where the concept of what is real becomes a choice. 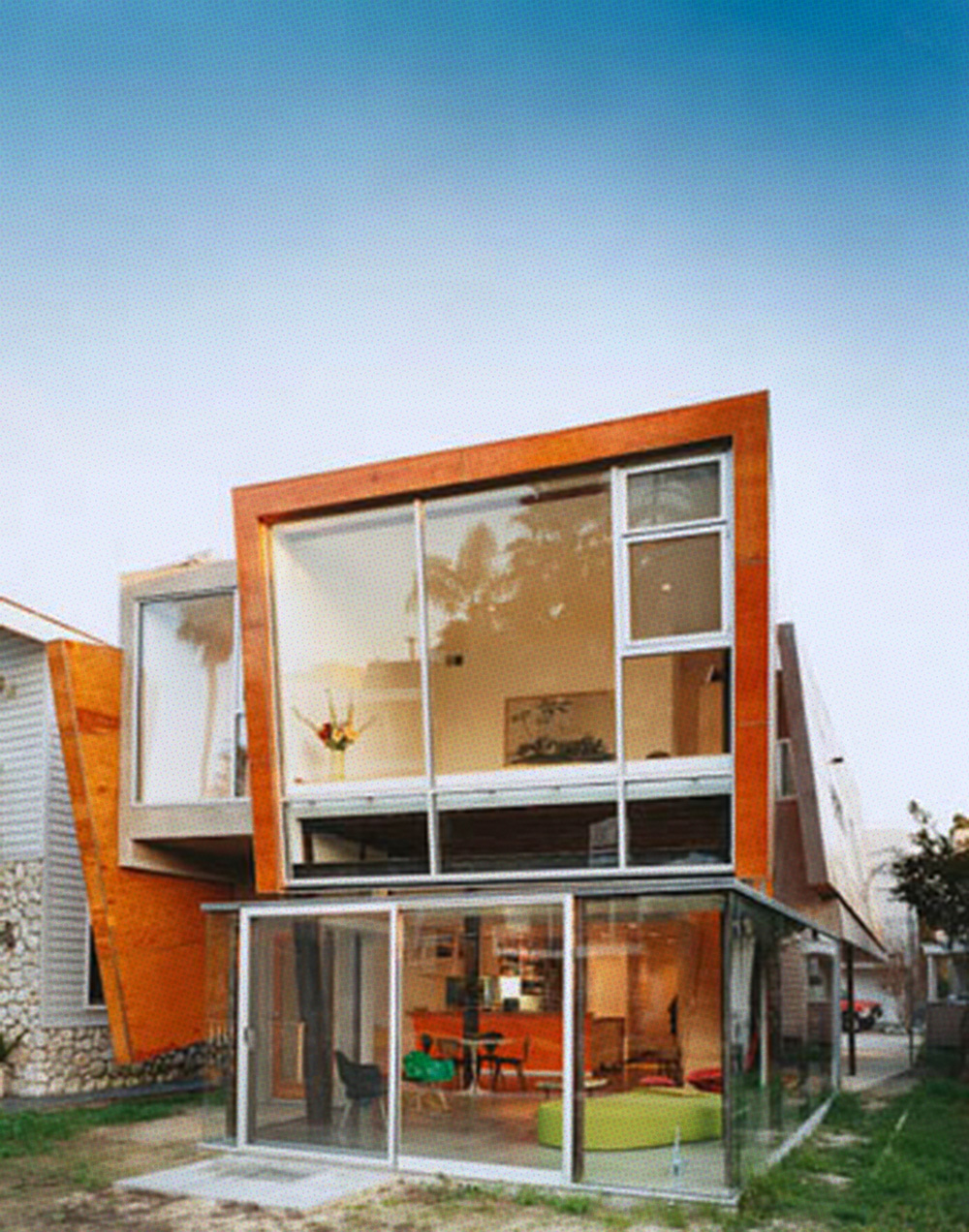 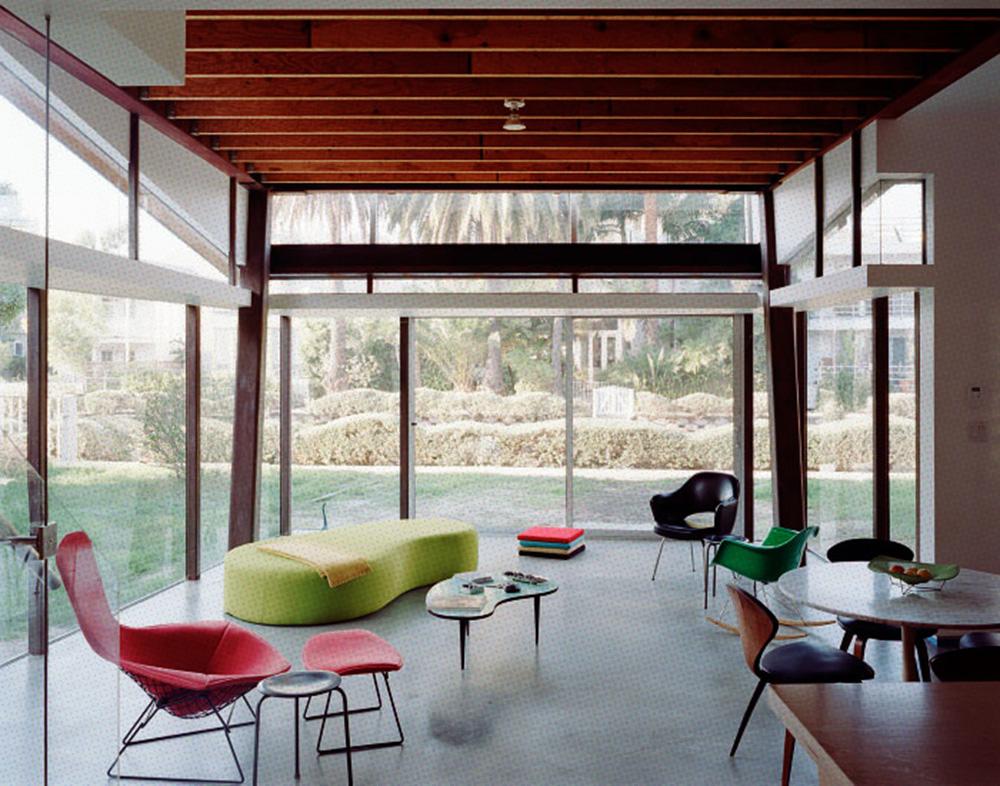 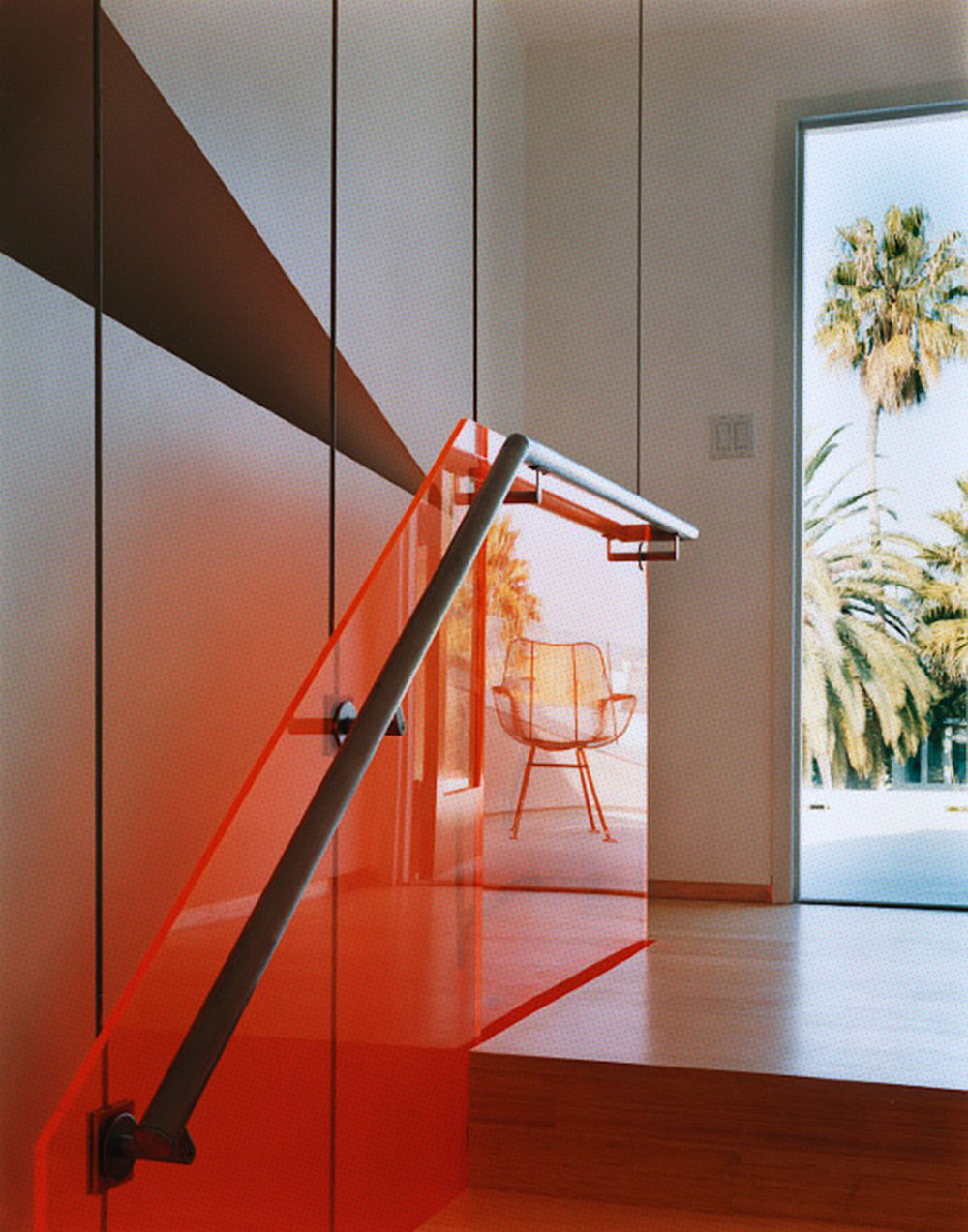 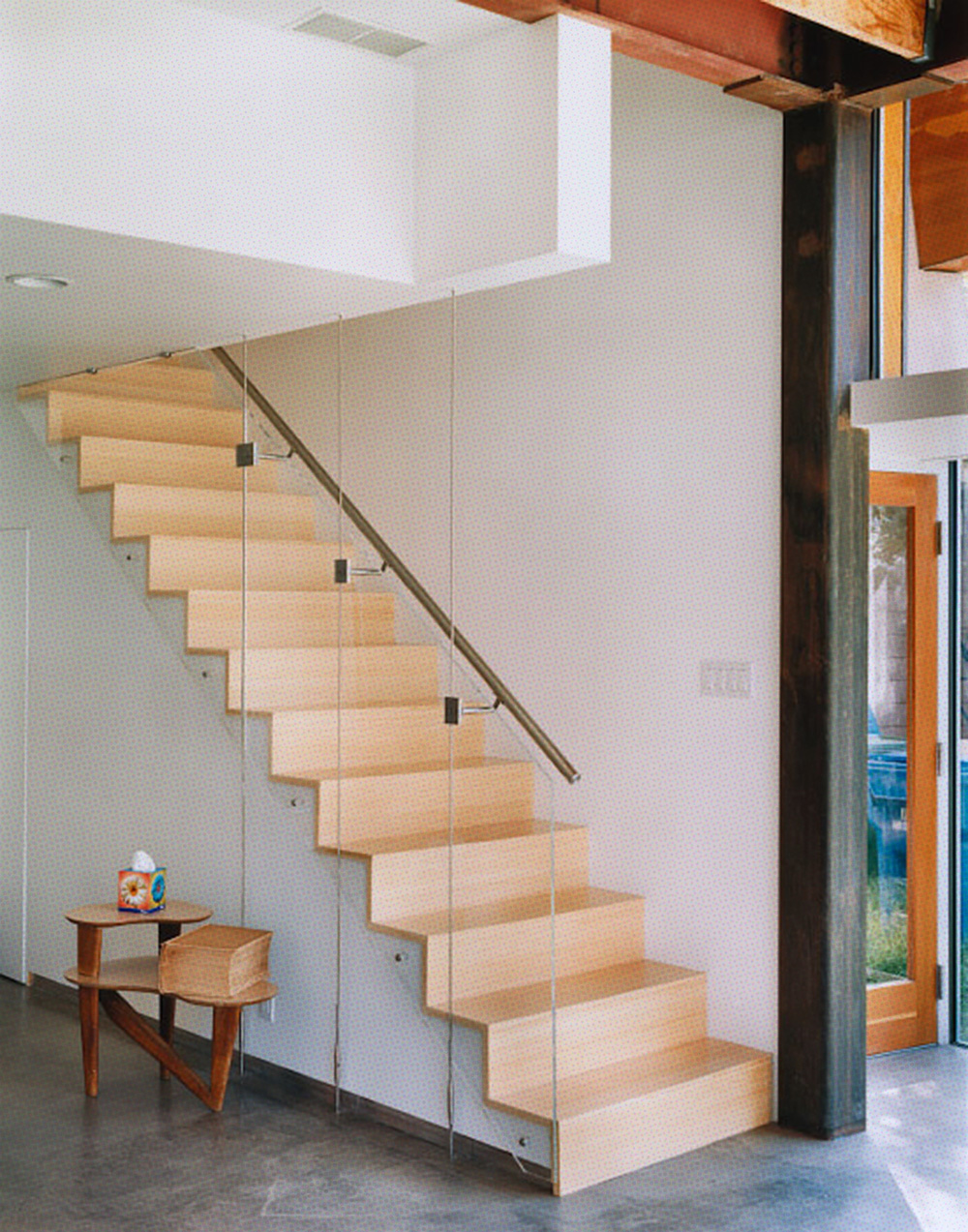 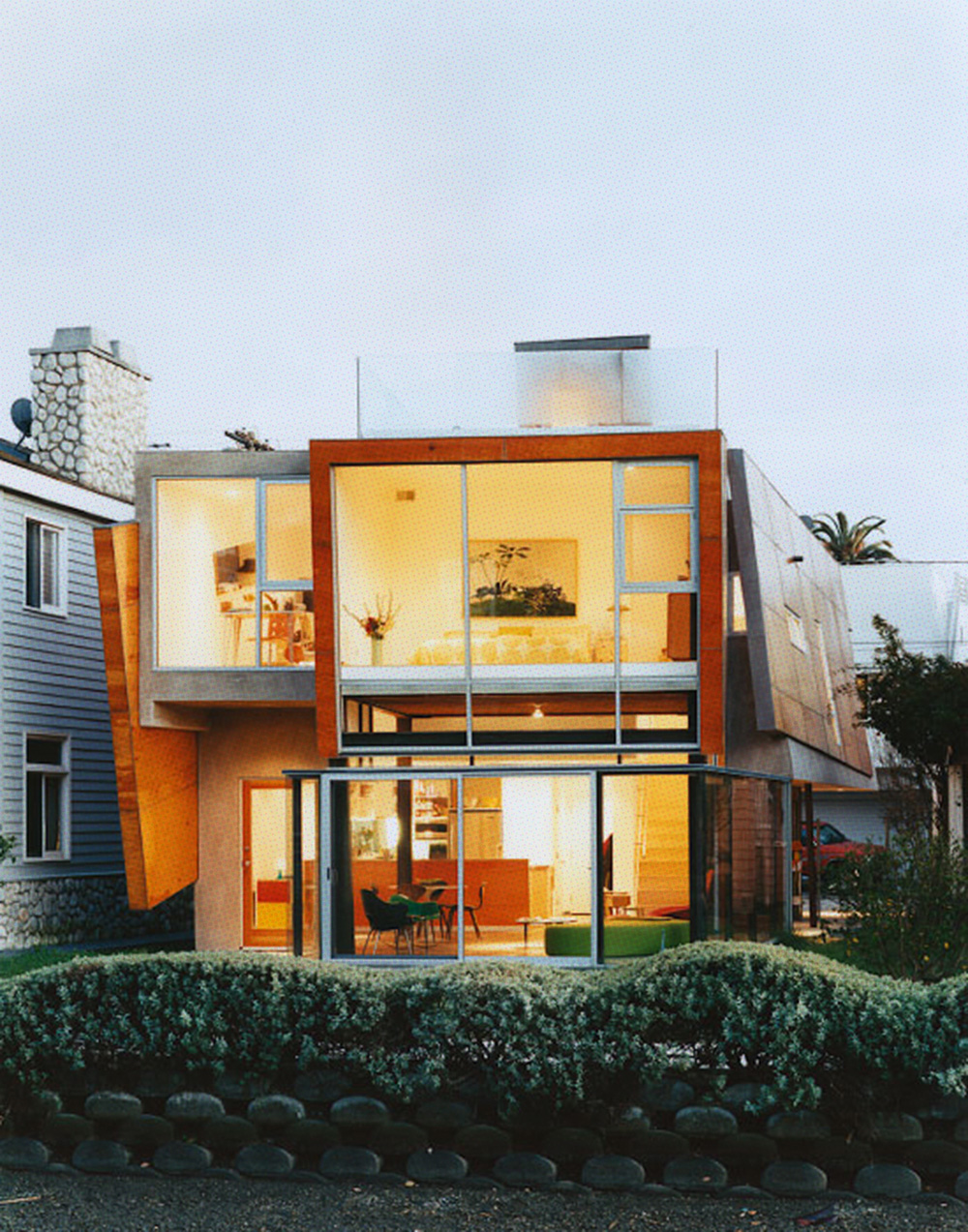 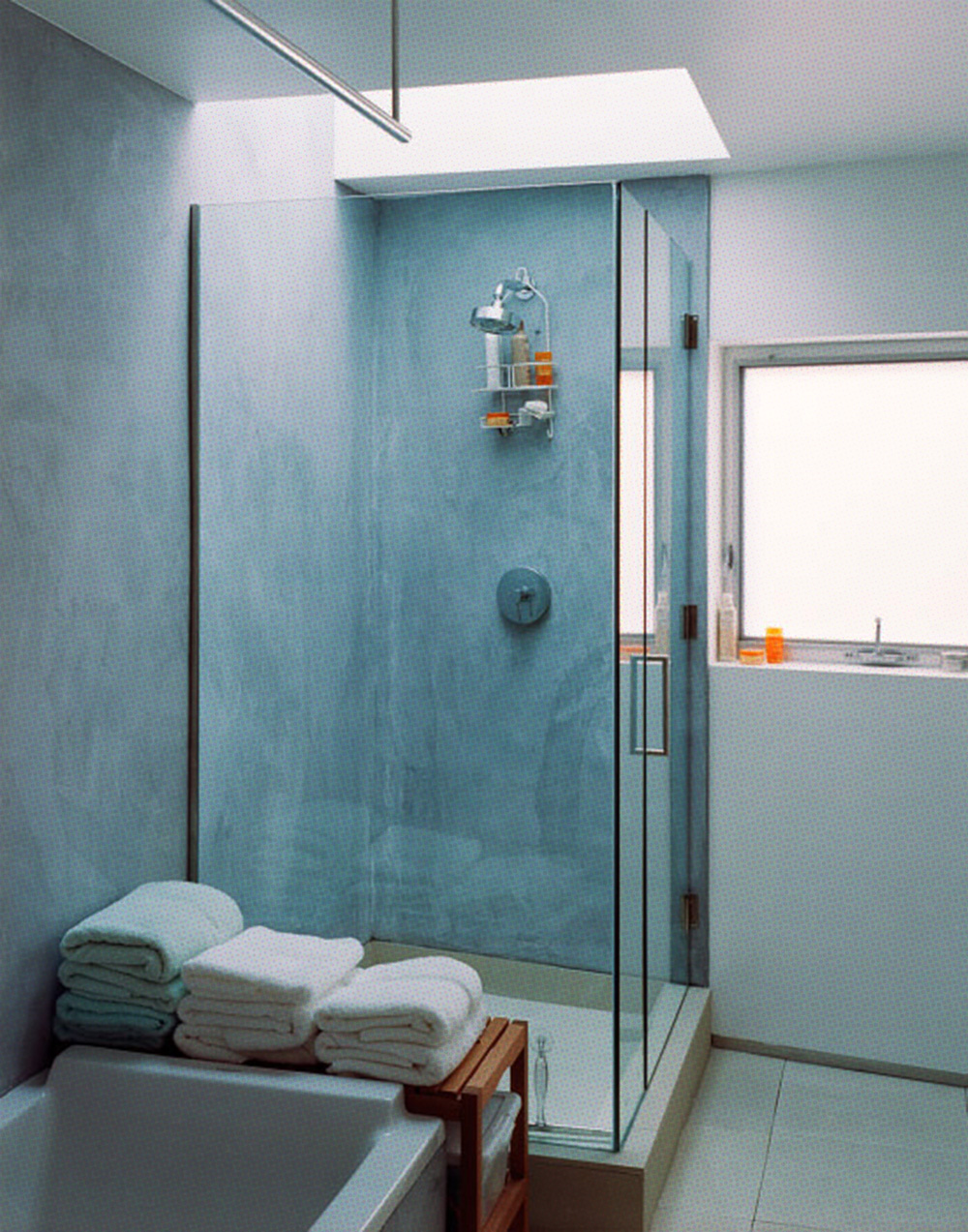 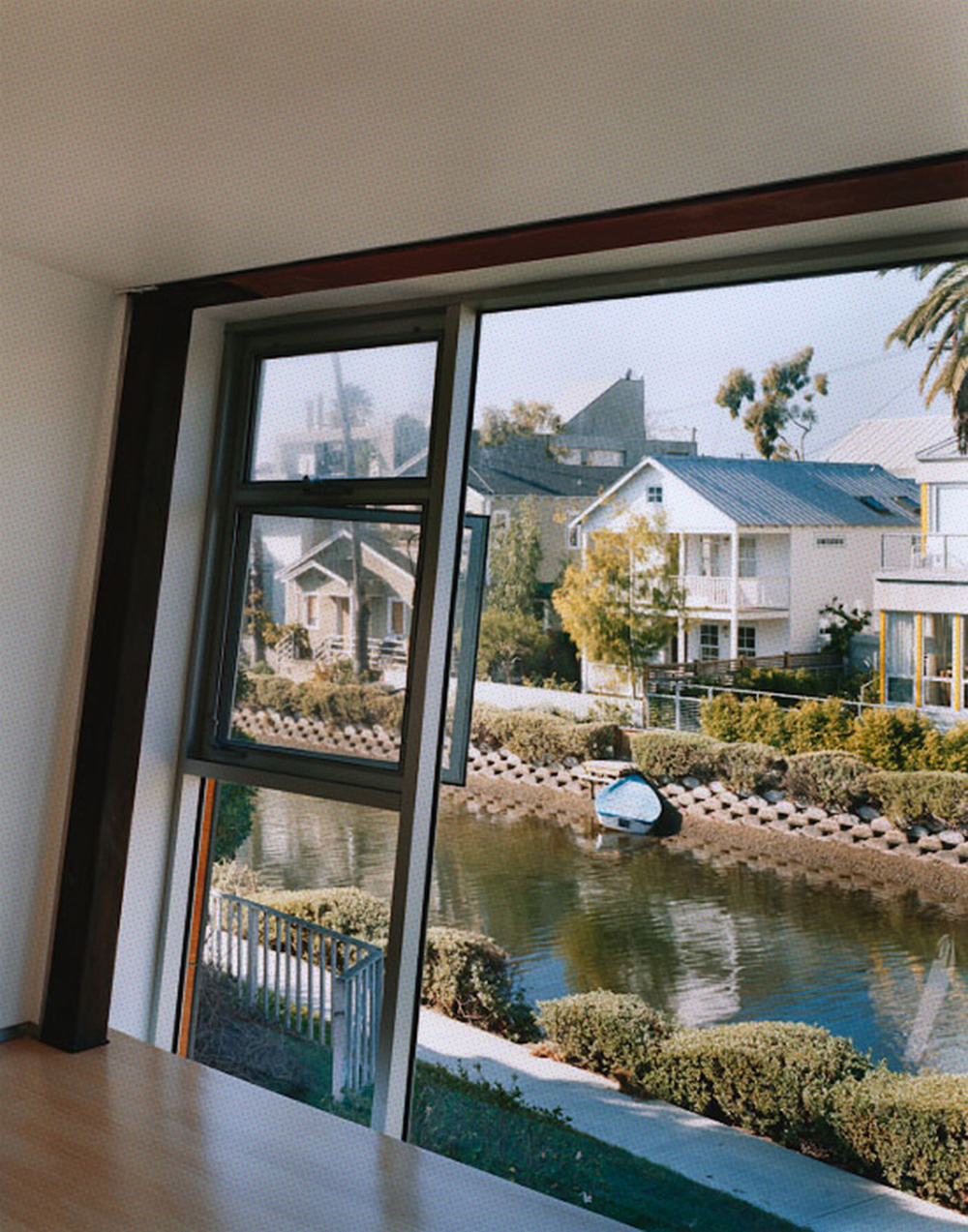