For many a visit to cinema has an intoxicating draw. Watching a movie film transports us to a transcendent state where the boundary between reality and fiction blur. In the darkness of the theatre, moviegoers can escape their own lives and enter worlds of luxurious glamour, hearty adventure, or even horrifying fear. Charles Pathe, the founder of the first French cinema empire understood the chemistry between cinema’s powerful metamorphic ability and the human need for escape. He was a visionary of epic proportions, again and again proving his acumen in anticipating the future evolution of the cinema industry.

Pathe’s innovative spirit and an understanding the transcendent spirit of cinema are the acknowledged inspirations behind this project for a new architectural space for Pathe Cinema. Our goal was to accentuate the excitement of the cinema by creating an environment scripted to give each guest their own “star treatment.” Visiting the new Pathe Cinemas Marignan involves a choreographed procession through a sequence of fantasy inspired experiences derived from the mystique of the entertainment industry. Ultimately, we wanted patrons to seek out the Pathe Cinemas knowing that their visit would entail much more than just a night at the movies.

Upon being greeted in your car by the curb-side valet, the Pathe red carpet experience has begun. Friendly hosts and hostesses accompany patrons up a ceremonial ramp rising from the Champs-Elysees to “Cinescape,” the interior landscape forming the heart of the Pathe Marignan entertainment complex. More than a mere lobby the Cinescape is a large flexible space that can accommodate any variety events, such as film premieres, award ceremonies or a party in the honor of Brigitte Bardot while broadcosting the latest gossip of the movie industry. Able to be transformed into a stage for a pre-show or aftershow performances the Cinescape is also a place to purchase of tickets and stock up on a wide array of gourmet food and drink.

Moving from the Cinescape ticket counter to a seat in cinema space is a transformation of context that is acknowledged by the design of the architectural procession. The patron leaves the known world behind and enters into the world of the film. Gradual constriction of the passages leading to the cinema space lends the feeling that one is about to enter a sacred space.

This sense of drama and anticipation gives way to a theatre chamber space which is calming. The light level is low and cool, the texture of the seats soft, visually the walls recede; it is a quiet architectural space that echoes the power of the stories residing within our collective unconscious. In this space where darkness thrives a membrane-like wall surfaces curve flowing with tenderness and delicacy. Linear patterns of low-level LED lighting reinforce the edges of the aisles leading down to the seats. The space, curving to echo cupped hands, is surrounded black walls that translucently veil the structure behind. Completed with the sensual lightness of a floating screen the space is both a cavern and a canvas poised for voyages of imaginative exploration.

As the closing credits roll and the theatrical experience is complete the movie patrons move through an exiting sequence structured to gradually ease them back into the public environment. Designed as an intentionally intimate space, closely spaced walls and a lowered ceiling create a quiet closeness that naturally channels the body and mind to a place of reflection and recovery. Windows consciously “fade up” to allow an gradually expanding view of the outside. Again greeted by the Pathe hosts the guests find tea, coffee and spaces conducive to contemplation. Allowing a return from the world of the cinema to reality, this re-entrant space maintains a connection to the cinema’s aura of collective awareness and other worldliness.

Nearly a century after it began, Pathe Cinema continues its founder’s vision of a company poised at the leading edge of innovation and creativity. The Pathe Marignon Cinema extends this vision towards the cinematic experience to new heights of service and theatricality. Responding to new advancements in digital imaging and sound technologies now available to the home theater audience this new space for cinema realizes the concept that in order to survive the future of the movie house lies in its ability to dazzle with a fantastic experience and service unmatched elsewhere. The design for Pathe glamorizes the cinema experience with a unique architectural environment bringing life into cinema and cinema into life. 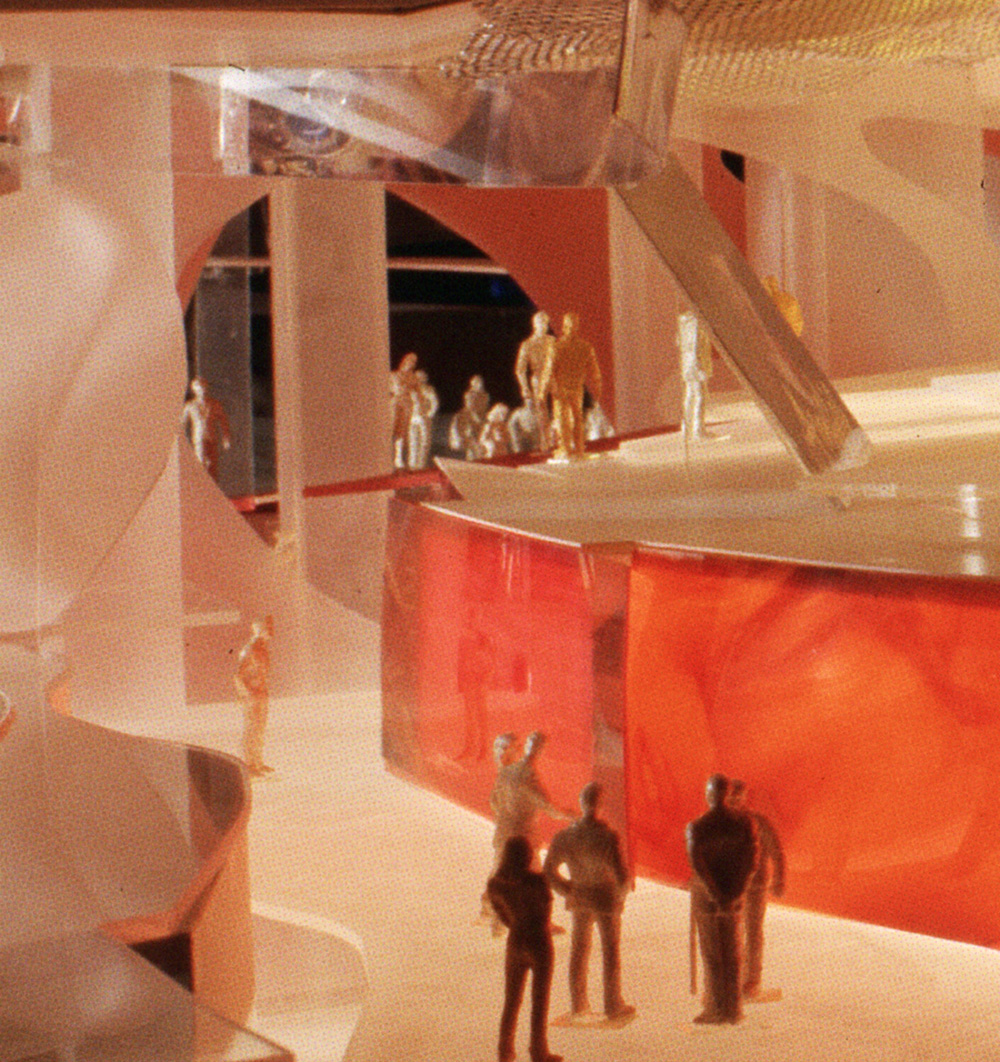 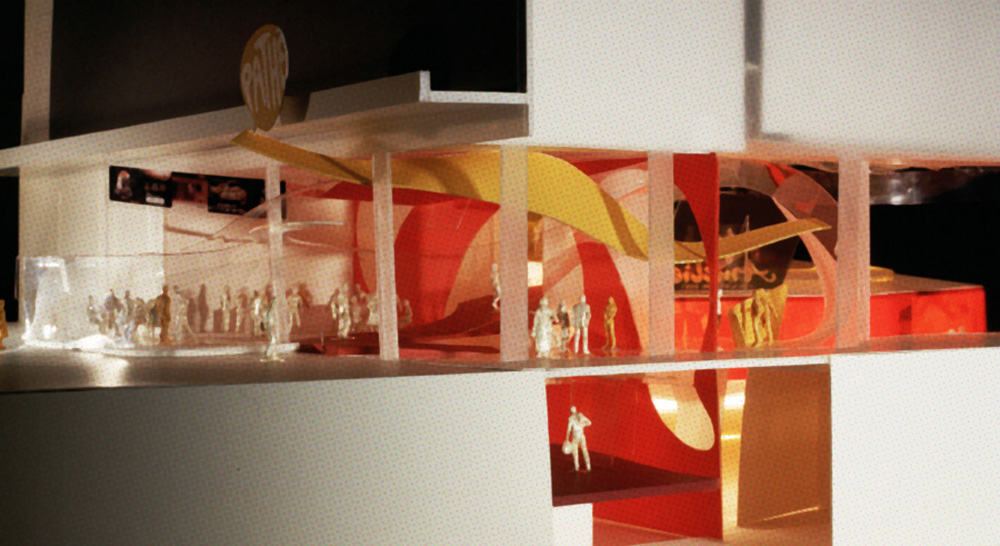 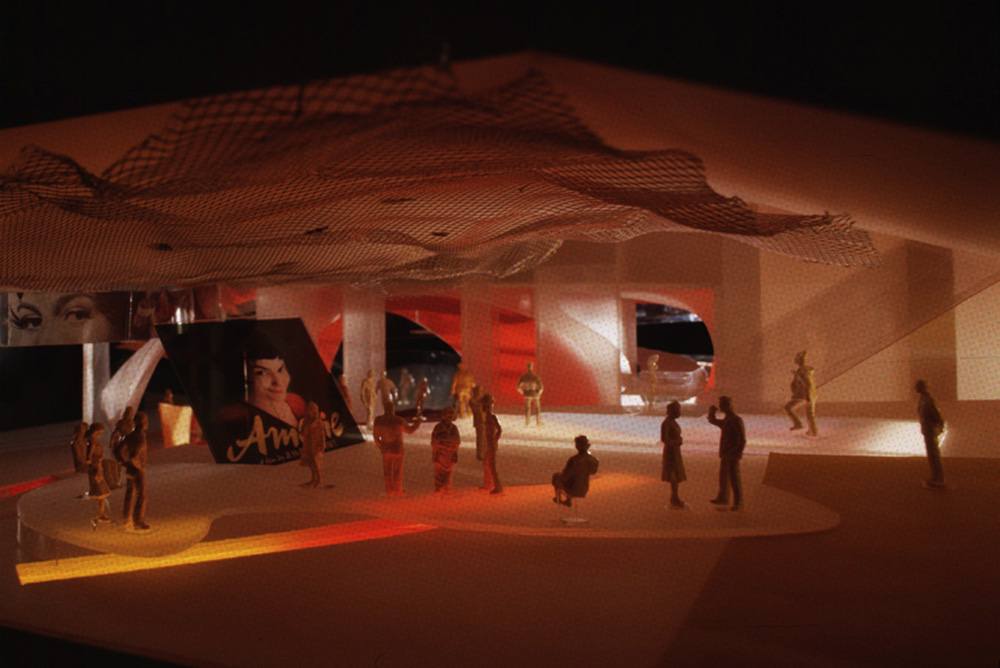 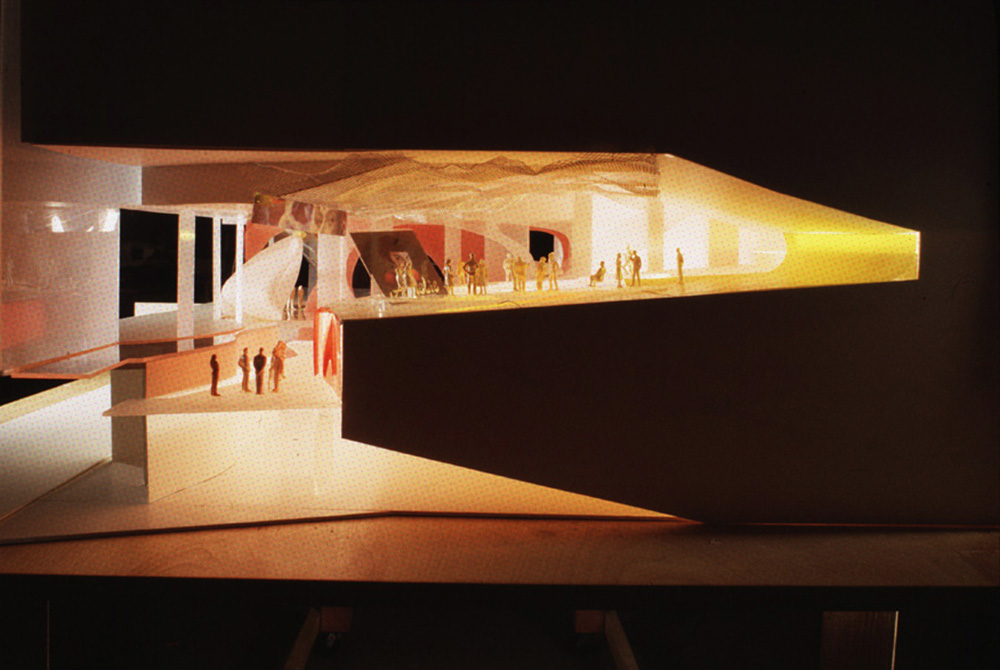