“The past sheds light on the future, the future gives meaning to the past.”

The new Publicis Drugstore arises out of itself. Rather than derived from styles or trends the architecture is instead the metaphorical offspring of the motivating principles of the Publicis Company. In this way the character of the company is translated into the building’s materials and tectonic language. The architectural vision for Publicis originated with the company’s founder Marcel Bluestein Blanchet who imagined a new signature building inspired by and conveying the core principles that were crucial in the company’s transformation from a family drugstore to a communication giant.

The new architecture of Publicis strongly exerts it’s new character while engaging the existing structure with a mutually respect and crafting a dynamic connection with the city and celebrated site of the Arc de Triomph. Revealing a fragile character of light and transparency that is at the same time strong the old and new elements of the façade embrace the city and its history. Far from ignoring the past, old and the new meet in a gesture of celebration and regeneration; collectively contributing more as a cohesive whole than they ever would have been able individually.

As a physical embodiment of Publicis company the new Publicis Drugstore reterritorizalizes zones of diverse activities to create an open and united space of commerce and discovery. Flowing naturally within the space are intense zones of architectural movement that give expression to the symbolic core of the multi-faceted business entity.

The program area for the renovation encompassed the façade and street-level drugstore, as well as four subterrainian floors below the existing building. Inspired by the spirit of “La difference” the architecture aims for an integration where concept and structure are mutually supportive and where a particular set of symbolic, practical, social, and technical concerns are imprinted in the innovative fabric of a place of reinvention.

When I first came the office of Publicis, peering through the glass entry I was intrigued o see a simple wooden door displayed and suspended at an angle. Out of interest I took a photo of it and later learned that it was the original door to the office of the founder of Publicis. Mr. Marcel Bluestein Blanchet, a self- made man kept it proudly as a reminder of his modest beginnings. On the flight back to Los Angeles I sketched and wrote about my observations, unable to get the door out of my mind,. When I developed my film the next day, the photo of the door offered a wonderful surprise: Reflected in the glass was my enthusiastic face looking in with the camera; behind me was a view of the Champs-Elysees and the city of Paris. Layered within this single poignant image was both inspiration and harbingers of things to come.

The door, which now holds a prominent place in the new building’s design, symbolizes the suspended past, poised at an angle and pointing towards the Arc de Triomph behind the clear glass screen reflecting the city it swings in both directions, inviting entry to the past and future.

Following in fire in 1970 in which the original Haussmannian structure burned down before Mr. Blanchet’s eyes the current structure was built in 1972. In place of the original building was erected an aluminum-framed concrete building clad in a copper-colored mirrored glass skin. Per its classifications as a high-rise structure it was constructed to meet all of the security, fire, and building code standards of the time. Within the fabric of it’s Parisian surrounding the building’s envelope is abstractly mirrored its internal programs with little regard for its immediate surroundings.

You lost me here. is there more to say/tell on the building’s status as an icon/experiment and what the owner’s perspective is on that? If so we should un-delete and expand.

ituated on a corner lot at the end of a large block, the 70’s building turned introvertedly inward despite its frontage on three bustling streets and proximity to the world’s best known monuments. On the East elevation the building presents an unadorned and detached facade towards the famous Avenue des Champs-Elysees. To the, South the building’s radiussed façade responds to the curve of Rue Presburg, which as part of the second circle around the Arc de Triomph traces a circle emanating from the Arch. Finally despite it’s seeming unimportance a narrow tertiary street known as a Rue Vernet plays a crucial arterial role in the day to day functioning of Publicis: as both the main employee entrance and primary conduit for deliveries.

Despite, it’s obvious shortcomings I came to appreciate the relationship which my clients had developed with the existing building in the thirty odd years they had been there. The intervention would have to acknowledge this lineage while at the same time fulfilling the building’s fertile opportunity to dynamically connect the building with its environment.

In navigating this territory we also obligated ourselves and the architectural forms to activate a commentary on the paradigm shifts characteritize and distinguish our current global culture from those that preceeded it. Discussing quantum mechanics in a book titled Other Worlds author Paul Davies instructively describes this philosophical evolution:

“In the old Newtonian picture, the universe consists of a collection of things, located here and in other places at this moment. Relativity, on the other hand, reveals that ‘things’ are not always what they seem, while places and moments are subject to interpretation. The relativist’s picture of reality is a world consisting of events rather than things…a new language and geometry is required which takes into account the observer in a fundamental way. Newton’s concepts of space and time were a natural extension of our daily experiences. Relativity theory on the other hand requires something more abstract, but also many believe, more elegant and revealing.”

In our exploration of this new territory we proposed a geometric organization that acknowledged the existing building, its relationship to its surroundings, and the site’s circumscription by strong currents of human and automobile traffic. Responding to this field of disparate conditions while maintaining focus on echoing the core principals of the Publicis company, the form of the architecture transcends traditional expectations. The introduction of a bold swirling vortex of energy initiates the building’s interface with its surroundings. Charges with the expansive openness of a daring sculptural form this spatial attractor is further energized by thetrajectories of pedestrians and vehicles as they move along through and around the building. At the eye of these centripetal elements is embodied the spirit and soul of the new Publicis.

The new building’s new façade is transformed with wrapping curved glass screens which contrast with both the columns and strictly mirrored fenestration of the existing building. Partially veiled with the shifting and overlap of the glass panels, the entire surface achieves a qualities of both depth and lightness reflecting the cinematic collage of the new and original elements with the activity of the building, the activity of the street, , message, and signage.

The primary arching steel structure of the main façade is orients the corner of the building along the Avenue des Champs-Elysees, Rue Presburge and Rue Vernet and is tied back to the vertical columns of the existing building. The secondary façade structure of custom-made from extruded steel forms a dancing lattice which marches across the main structure anchoring the curved glass panels. A force of momentum rises towards the corner with a kinetic spiral structure both announcing the architecture and celebrating its relation to the Arc de Triomph.

Aspiring to defy the forces of gravity and geometry I had imagined a new face for Publicis heading skyward like an angel. Weightless and airborne with its wing stretched outwards toward the Arc de Triomph, limbs of glass and steel dynamically impling a capacity for flight.

The gestural vocabulary of the Publicis fabric can also be understood as an analogical reflection of the Parisian metropolis and its streetscape. Underscoring the project’s reflective tendencies with project activates a city within mirroring the city without. Entering beneath of spiral of the façade the visitor’s gaze is trained skyward toward the fusion of the old Publicis drugstore with the new. As the ramp ascends skyward the new Publicis landscape is revealed as it unfolds into various zones of commercial activity evoking the lost Parisian shopping arcades of the last century, so famously lamented by Walter Benjamin.

In keeping with the spirit of the building’s exterior, central themes of the interior spaces are also openness and transparency. Inspired by Parisian garden design principals the public spaces are delineated with a series of transparent and translucent glass partitions deployed to maintain a comfortable level of privacy and intimacy while maintaining a sense of visual continuity throughout the space. Viewing the social and programmatic interactions metaphorically the space again reinforces values of Publicis. The removal of visual barriers for instance reinforces a core principal where the company’s relationship with their customers is strengthened with corporate transparency.

As one enters through the glass doors of Publicis the exterior’s predominantly vertical geometry is reoriented toward the horizontal. A newsstand and tobacconist to the right are balanced on the opposite side by the curved glass wall at the perimeter of the restaurant. A little flower stand punctuates the ramp as it continues upward towards a large window offering a view of the pharmacy. From here stairways lead both up to bathrooms, administrative offices, and the Publicis conference room and down to a well-stocked cigar shop boasting private boxes, a wine corner with an international selection, a radio studio, casting studio, bathrooms for handicapped patrons, and a prep kitchen and storage area. Continuing towards a library and grocery store and a small Café Nescafe the ramp traces a parallel path along the Avenue des Champs-Elysees the Rue Presburg, all the way to the Rue Vernet. As it does the story of the Publicis legacy unfolds through a series demonstrations illustrating the company’s concerns and values.

A second entrance from the Avenue des Champs-Elysees leads both to the Publicis Group offices and to the below grade cinema complex. Accessed directly from the street the new space of Publicis Drugstore open outward and eagerly embracing the city and its patrons. As a nexus for a diverse group of clientele to satisfy their need for commerce and congregation the drugstore represents the deeply held principles of Publicis and its foundation. As a social center; people fill their prescriptions, get the news, share ideas, stay informed, have a generous meal, watch a movie or just meet new people from throughout the world.

Throughout this journey sculpted floors and ceilings of specific zones interact with one another in complex harmonies creating sequences of commercial spaces that are both modern and useful. Like a leisurely conversation on quite afternoon, the building’s various programs flow seamlessly into one another; like surfing the web, one thing leads to the next. As a microcosm of the larger city outside, a visit to Publicis reinforces that he Publicis Drugstore is the heart of Publicis, and an understanding that this place is the heart of Paris.

The new building has become a vehicle of cultural identity where the joie de vie of both Paris and Publicis are communicated to and by the people. Initially, the architecture provokes a curiosity which attracts you inside. Drawn back again and again by a calendar of special activities, seasonal attractions and special events the patrons of Publicis also find many habit-forming reasons to return: whether for to purchase a particular favorite cigar, or enjoy the atmosphere of the cafe, or to recapture the quality of light across the façade while dining with an old friend the building enters into the currents of life. From the foundations of the village drugstore upon which it was constructed the building has spawned a burgeoning legacy of association in which Publicis becomes ingrained in public experience. Through modifying its genetic blueprint this drugstore has been recoded to embrace tradition within the age of information. 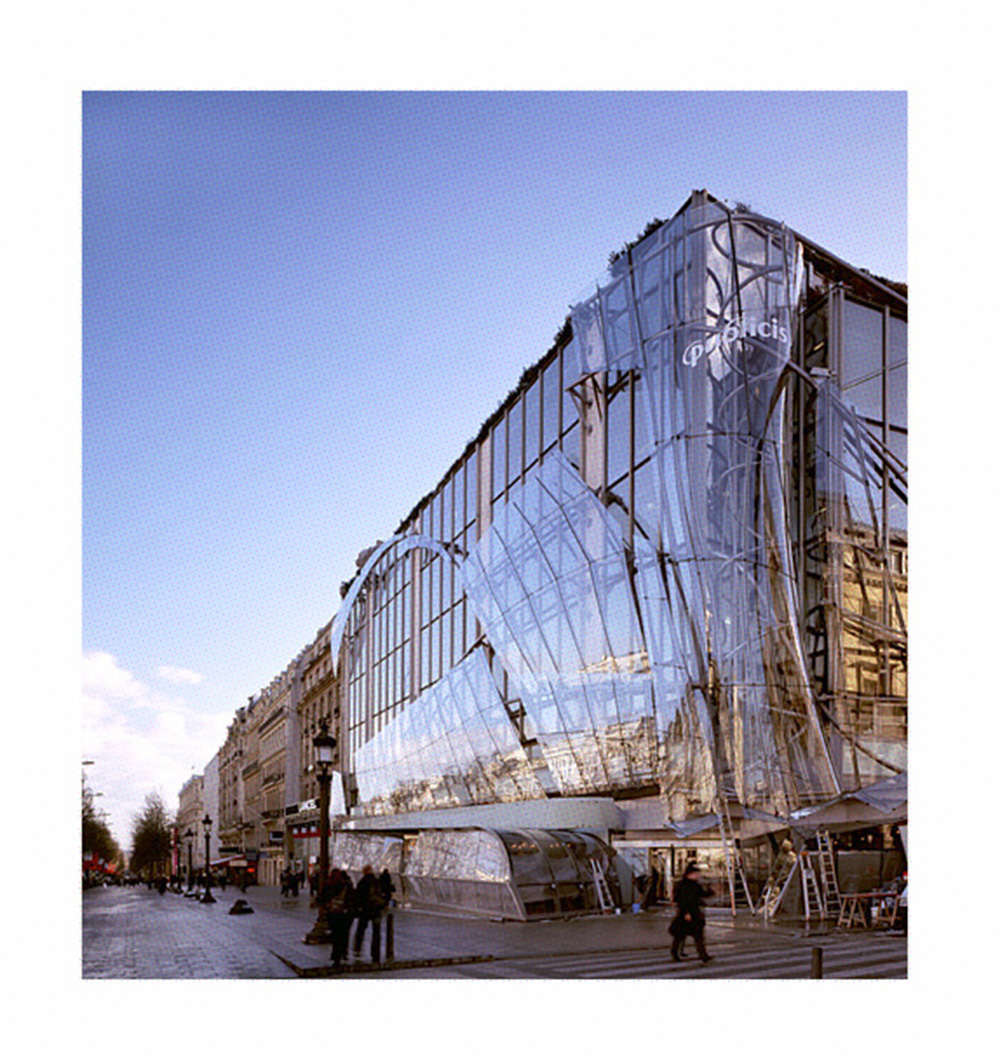 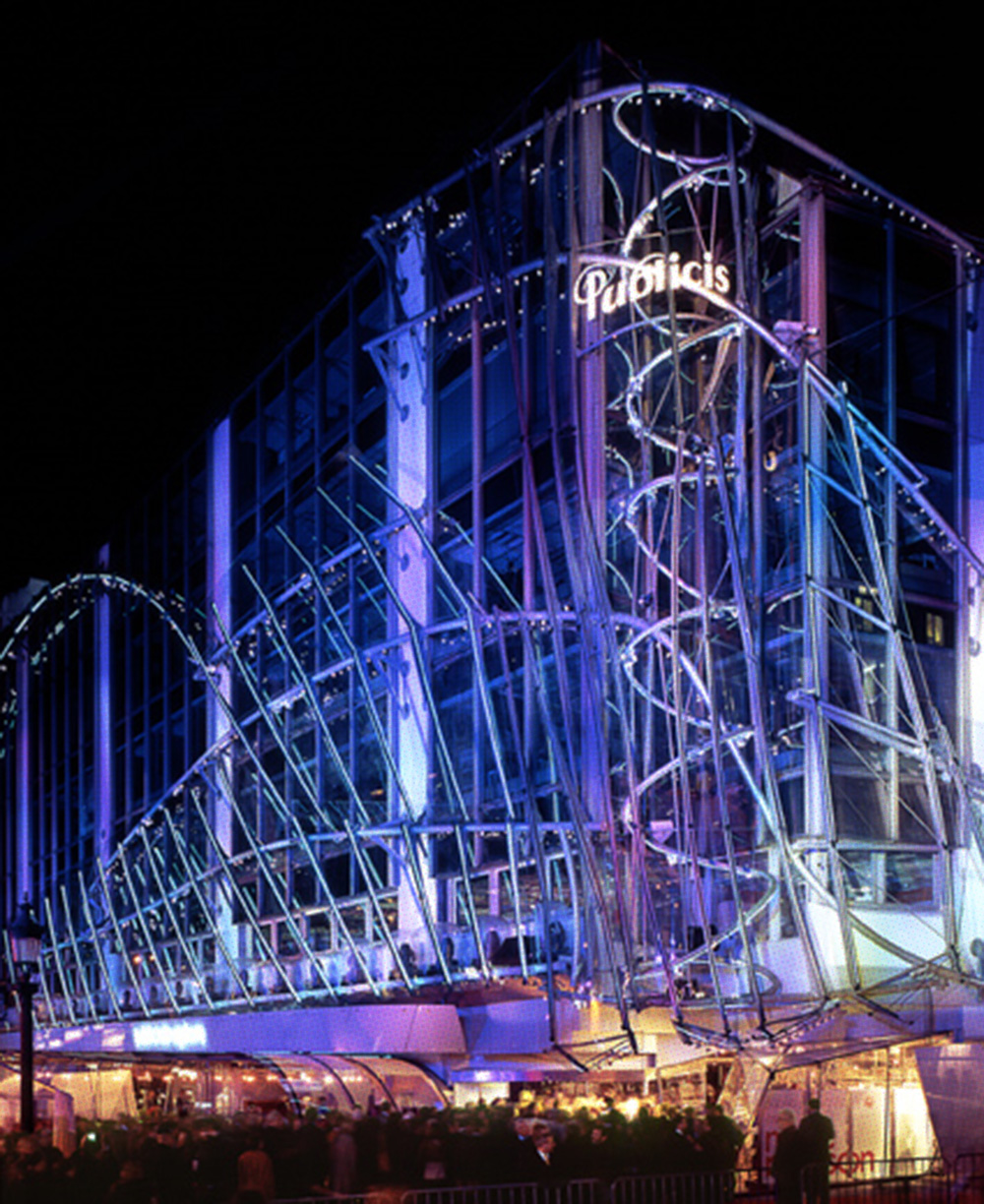 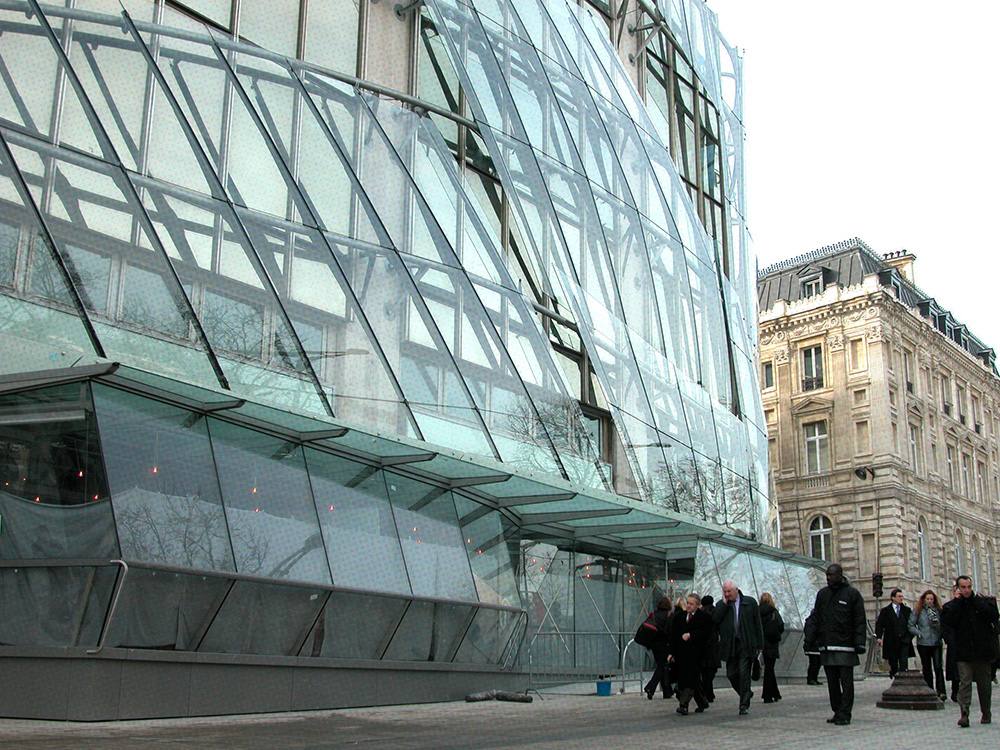 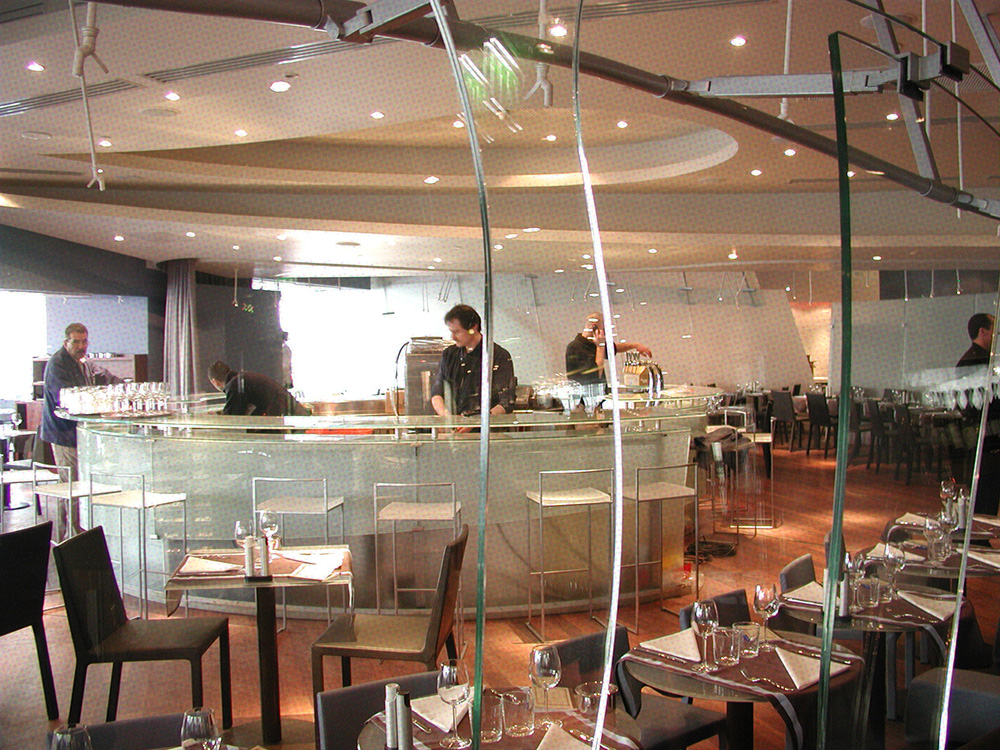 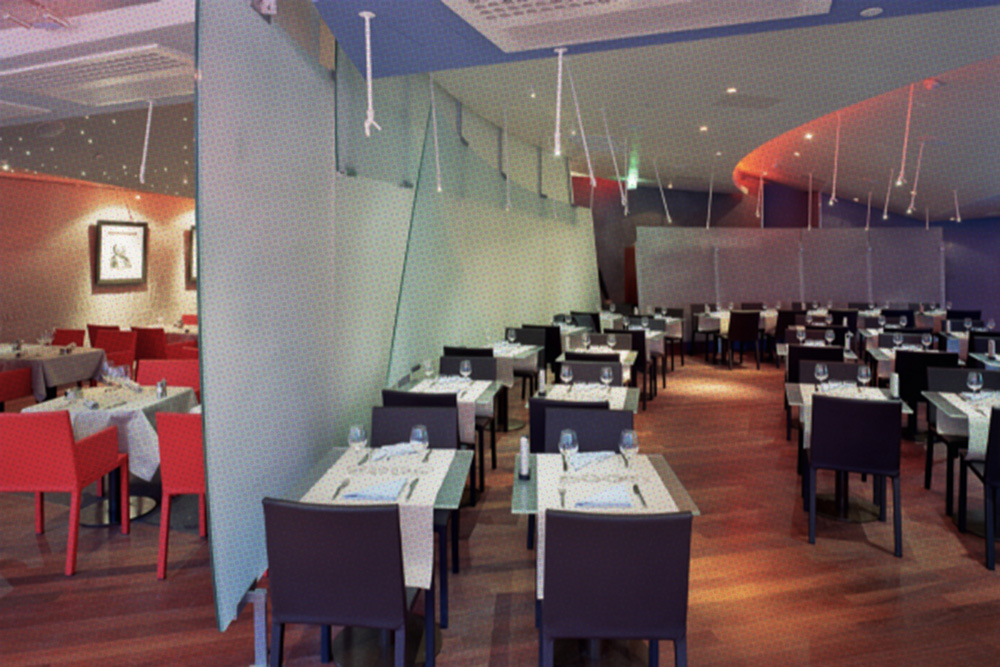 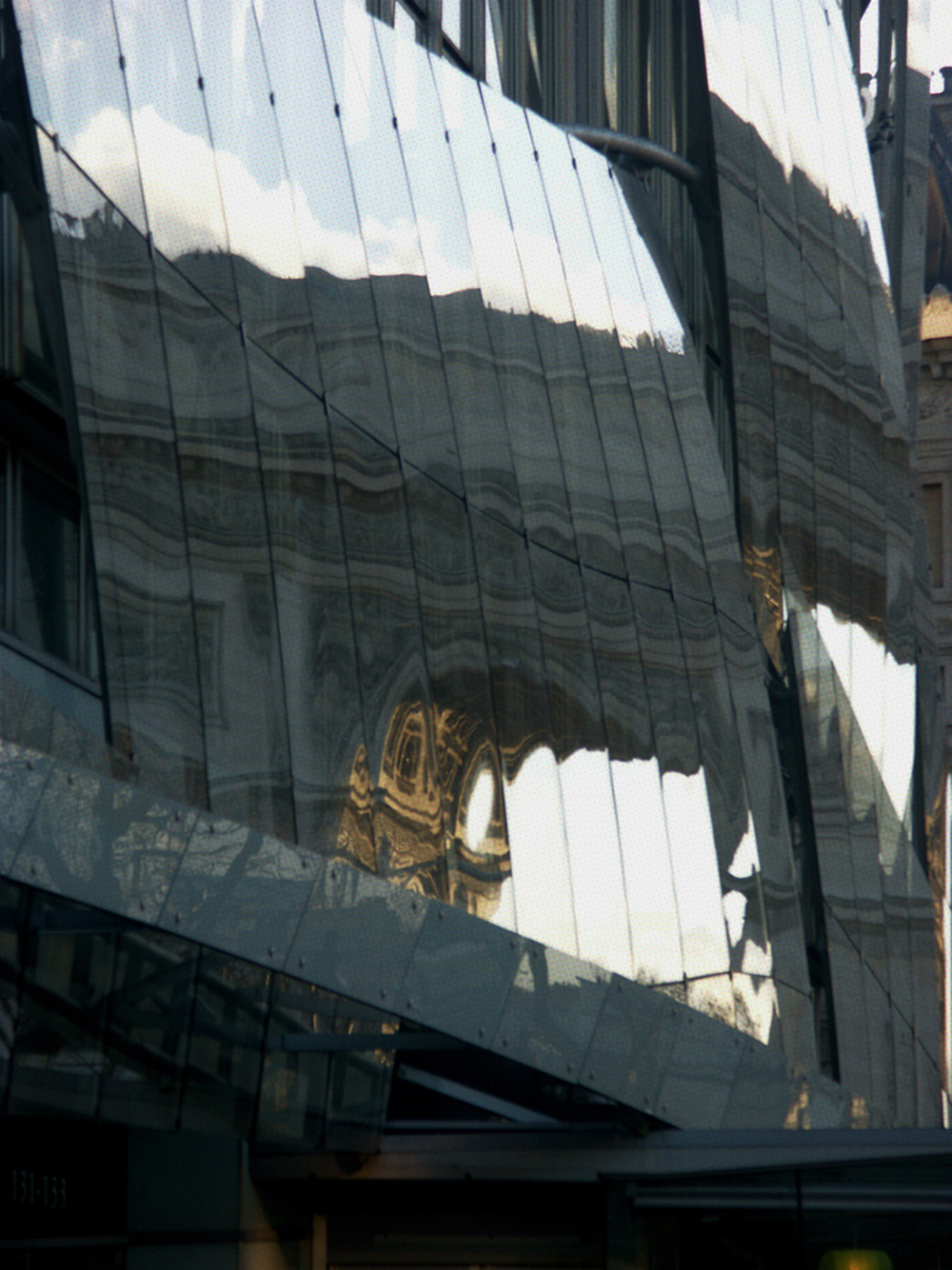 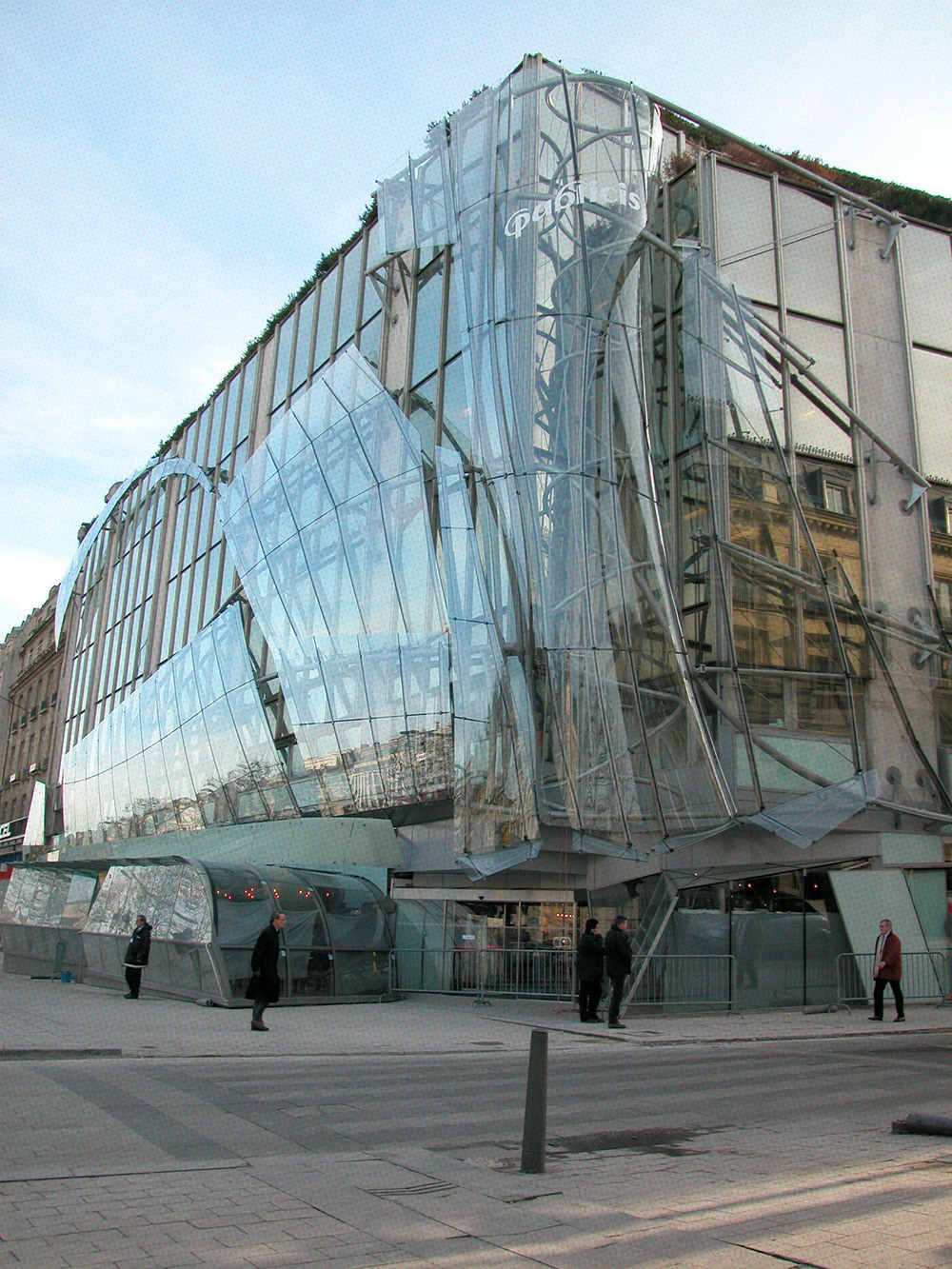